Workshop "Science Cases for an Interferometric Instrument in the Visible" 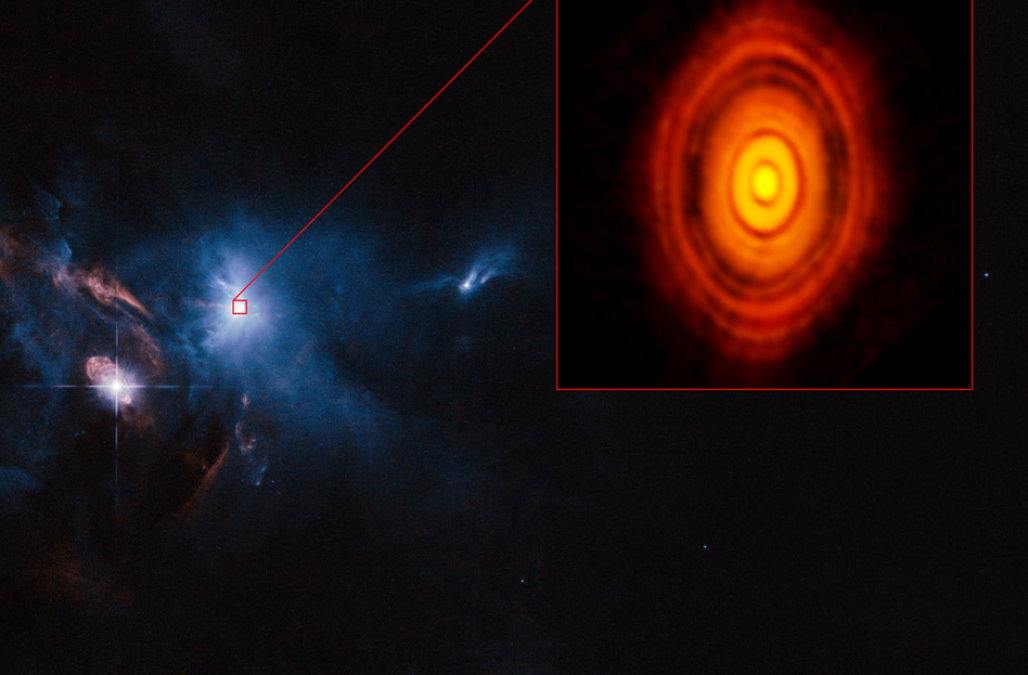 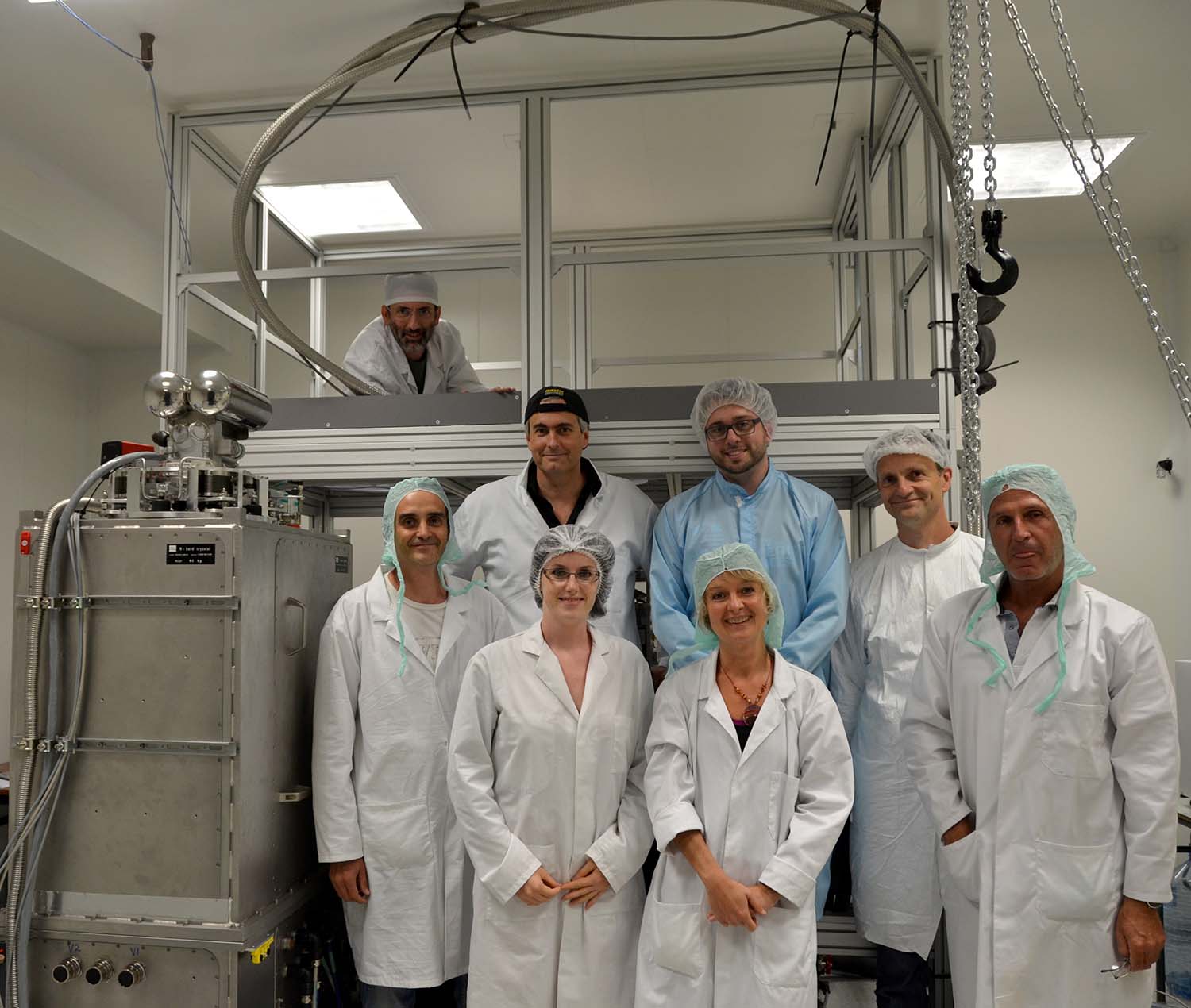 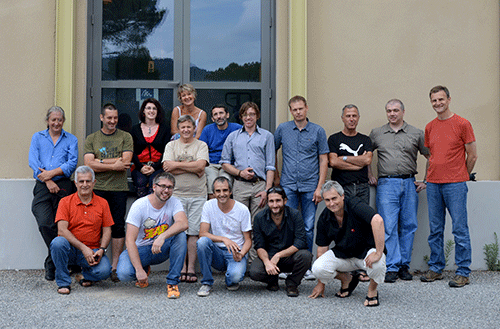 Asteroids at the “photo finish"

The Laboratoire Lagrange of the Observatoire de la Cote d’Azur plays a major role in Gaia Solar System science, as some of its members are involved in the derivation of asteroid physical properties (M. Delbo, L. Galluccio) and the prediction of asteroid observations (F. Mignard, Ch. Ordenovich). Also, P. Tanga is responsible for the whole Solar System data treatment in Gaia. For this reasons, it is clear that receiving the first test data from Gaia created a lot of excitement ! Here below, we try to illustrate the challenges specific to Gaia even on simple data such as those presented here.

We tend to think that a still picture, shot with an ordinary camera, represents a subject at a given time. But this is not always the case. In some situations, a picture can show the evolution in time of the depicted subject. This is the case, for example, of the well-known “photo finish” technique widely used in athletics to record the competing athletes as they cross the arrival line at the end of the race.

How does it work ? Simply, the camera aims only at a vertical strip containing the finish line and repeatedly photographs it at high speed. By putting all the strips together side-by-side, one can obtain the evolution of the image of the finish line as a function of time. As weird as it may sound, the CCD camera onboard Gaia works exactly the same way – by transforming the recorded star positions into times, the finish line being a thin strip of pixels on the edge of the detector.

Let’s imagine that we are looking at a number of athletes all running at the same speed on a straight track, but each of them having started the race at a different time : in this analogy, these are the stars, which drift across the Gaia telescopes all at the same velocity – given by the constant rotation of the satellite. If Gaia observes them several times, they will always appear spaced by the same delays.

Now, let’s add to these well-behaved competitors a different type of athlete, a rebel one who’s not playing by the rules, always running either much faster or much slower than the others, and not following the direction of the track lanes but drifting as he/she pleases. Each time this eccentric athlete crosses the finish line, it will be in a different position relative to the competing runners. This is how an asteroid appears to Gaia, as its motion relative to stars makes it appear always in a different position, as a function of the time at which it is observed.

This unorthodox behaviour opens up a specific category of problems when dealing with asteroid observations. The first one is predicting when – and where – Gaia will observe a given object. In practice, it’s like predicting in advance the delays of the eccentric athlete relative to the others, when on the finish line. To perform this computation, we need to have an exact knowledge of its trajectory (the orbit of the asteroid), along with the precise speed of the “ordinary” competitors (the stars). In the case of Gaia, all these pieces of information are known, but the complexity of the scanning law, which displaces the “arrival line” in non-trivial patterns, makes the task extremely delicate. Besides, there are several “finish lines” on the Gaia focal plane (at least one per CCD), so the whole geometry of the system plays a role.

The second type of problem concerns the processing of asteroid observations, especially in the case of newly detected asteroids or of asteroids whose orbit is not yet known to great precision. In fact, each time the asteroid crosses the “finish line” it will be in a different region of the sky. Only observations that are close in time can be easily linked together, as the asteroid displacement relative to its background will be small. If the observations are performed over longer time spans, the presence of several such “rebel runners” can make things extremely complex. 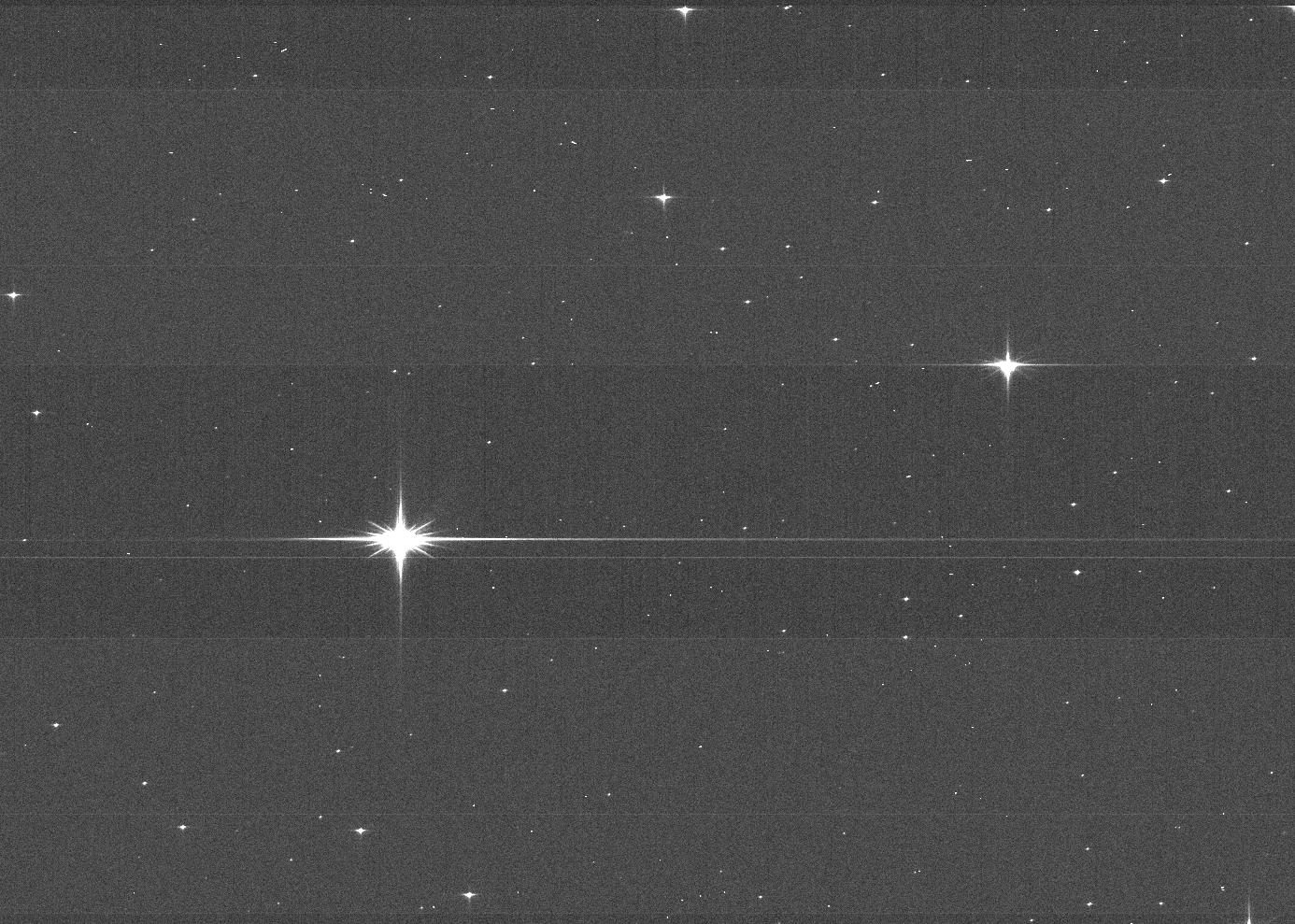 These various aspects are illustrated in the following pictures. The first one (right) is a test image of the asteroid (54) Alexandra, a bright moving target. It was obtained by programming Gaia in a special imaging mode. As described before, this is a “photo finish” image. It was reconstructed by moving along the horizontal axis, which is equivalent to the observer moving in time : each pixel column represents the signal present on the “finish line” (in practice : the edge of the CCD) at a given moment. In the image, the time delay between the arrival at the finish line of the bright star and the asteroid is about 1.26 seconds. A very accurate timing of each source “arrival” is the basis of the extraordinary astrometric capabilities of Gaia.

More important, however, is the fact that in this image the predicted position of the asteroid is very close to the observed one, only a few pixels away. Given the computational difficulties involved in this process, this is an achievement with important consequences, such as the possibility to predict well enough very close “encounters” between a star and an asteroid on the plane of the sky – these are potential sources of confusion while searching for other types of anomalies (when monitoring the brightness of a star, for example). Many astronomers want to be alerted when an interesting change occurs, not when an asteroid is just passing by !

On the other hand, other astronomers (planetary scientists !) are interested in the asteroids themselves. In fact, Gaia will observe 350,000 asteroids, providing the richest sample of precise orbits and physical properties that we could dream of. Those rebel runners, containing clues about the Solar System’s formation, are really interesting, and come in large quantities. Our capability to track their position is essential in the identification process. 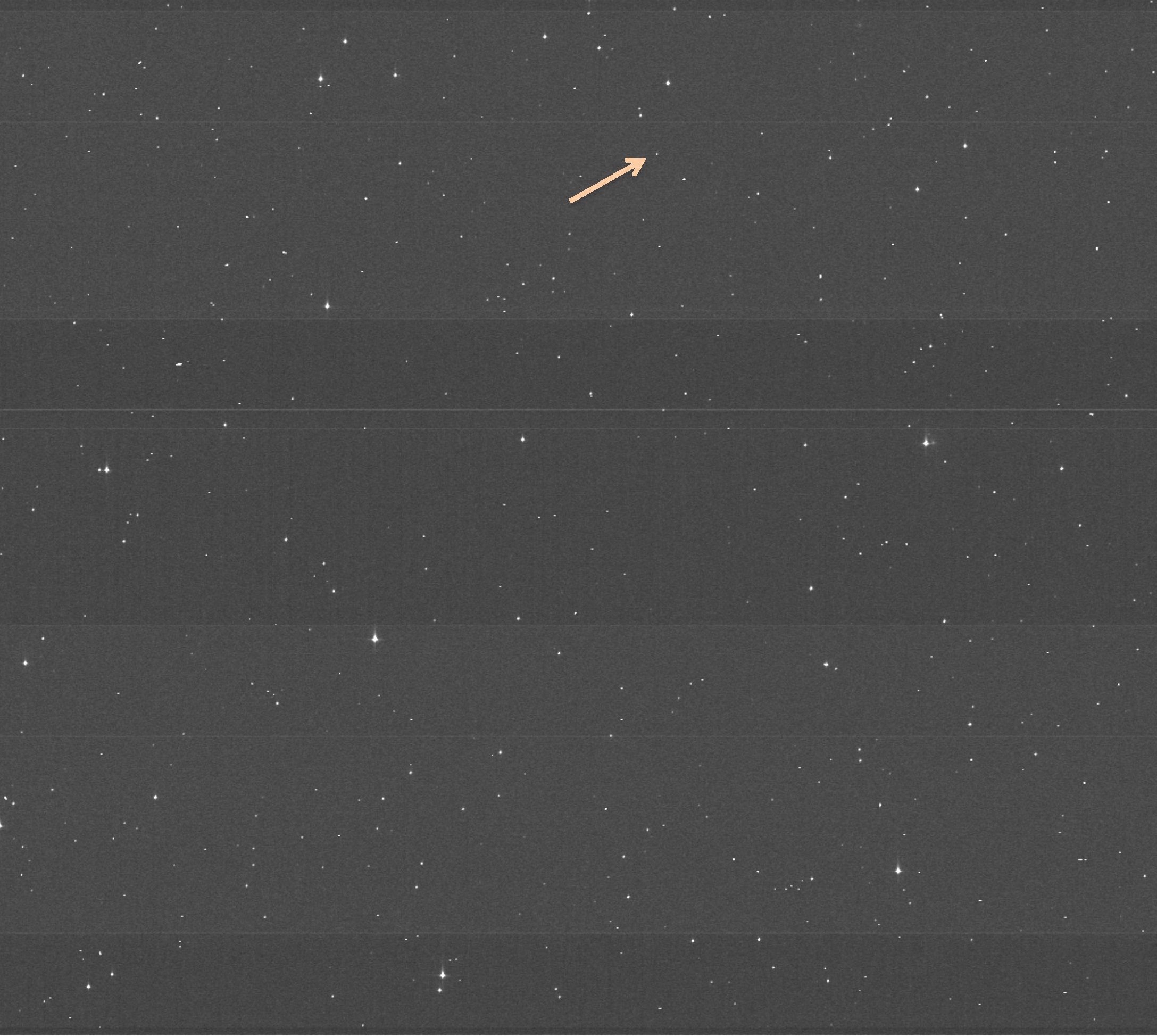 The case of the asteroid (4997) Ksana (above) is more difficult, and showcases the capabilities of Gaia in detecting and identifying asteroids. Because it is very faint, it may have been confused with several stars – some not even present in current catalogues – making its identification more ambiguous. The presence of a source very close to the position where the asteroid was predicted to be is very encouraging, but only a comparison of data acquired over time can provide a confirmation. 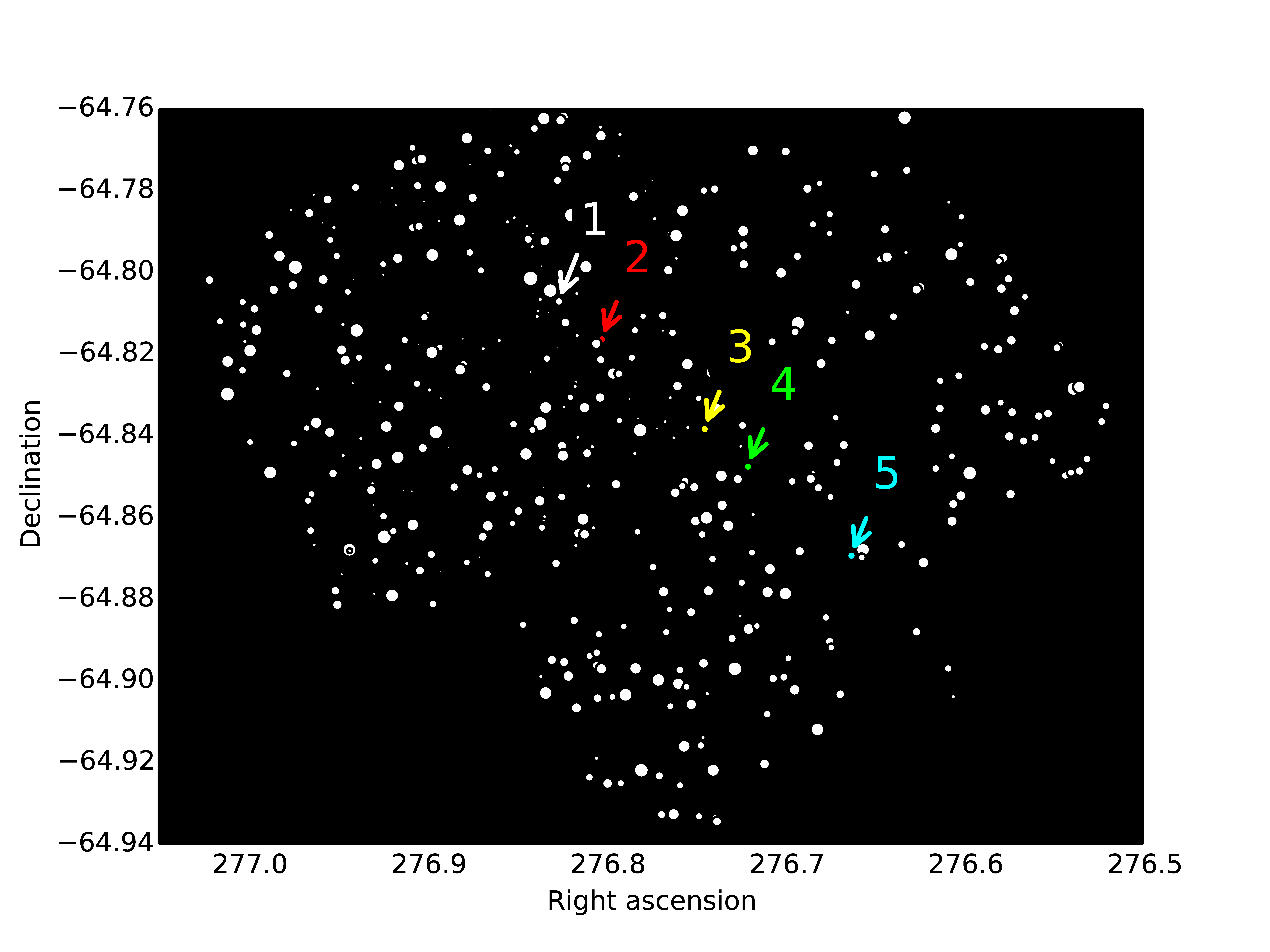 The result is shown in (left), which represents an intermediate product of the processing itself : the preliminary positions of the sources seen by Gaia, as determined by the “Initial Data Treatment”. In these images, each point is a source and the point size is proportional to the source’s brightness. Different colours represent the stars observed during five different sweeps of the same sky region, each lasting 6 seconds, by a single CCD.

The asteroid (4997) Ksana is now clearly seen moving from one sweep to the next (as indicated by the arrows). Checking the presence and motion of the object at the corresponding epoch provides a secure confirmation of its nature. A final remark : the observations are not equally spaced in time, and the closer couple of detections correspond to the source passing through the two telescopes (106 minutes apart) while the satellite rotates. A full rotation of the satellite (every 6 hours) separates the two detections in each pair.

Gaia asteroid observations will be processed using the software pipeline designed and implemented by Coordination Unit 4 of the DPAC, running at the CNES processing centre (Toulouse, France).

The data presented here are extracted from the results obtained by the Initial Data Treatment (IDT) pipeline, which was largely developed at the University of Barcelona and runs at the Data Processing Centre at ESAC. 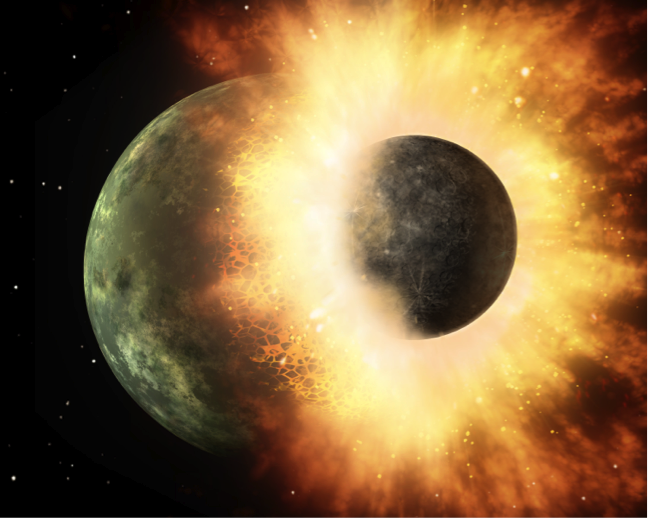